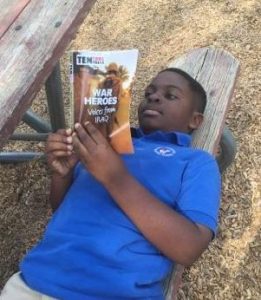 During World War II, everyday citizens fought for our country to protect and preserve the values that made America great. Many of them found incredible courage they didn’t know they had in firefights in the bombed-out fields of France, in dogfights over the flak-filled skies of Belgium, and in hand-to-hand combat on the bloody beaches of Okinawa.

Among the heroes, you’ll read about the colonel who led his Rangers up a 100-foot-high cliff while the Nazis were firing down on them… the teenage Marine who dived on two exploding grenades to save his fellow soldiers — and lived… the airman who was blinded and wounded from an attack by German planes yet helped save the crew of his crippled bomber.

Any teacher who has a Scholastic account can order books for you on scholastic.com or by calling 800-SCHOLASTIC and asking for item number 978-0-439-93405-3.