The first responders on September 11, 2001 — firefighters, police officers, emergency medical technicians, paramedics, military officers and even many civilians — risked their lives to save people they didn’t know. Every one of them is a hero. This book features ten gripping stories that reflect the countless breathtaking acts of heroism that occurred inside the World Trade Center, the Pentagon and a hijacked plane. Among other amazing true accounts, you will read about the miraculous survival of the fire captain and his men who were buried alive when the north tower collapsed… the cop who dodged death twice to help save others… and the two navy officers who ran into a burning, crumbling section of the Pentagon to rescue a trapped worker. 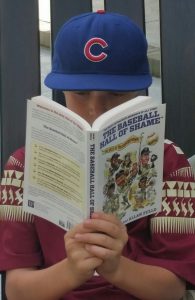 Any teacher who has a Scholastic account can order books for you on scholastic.com or by calling 800-SCHOLASTIC and asking for item number 978-0-545-25506-6.