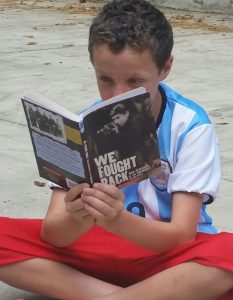 This book features the incredible true stories of teenage Jews who fought back against the Nazis during the Holocaust. There is a mistaken impression among many people that the six million Jews who were exterminated by the Nazis were led to their deaths like sheep to slaughter without resisting. Although there was relatively little armed rebellion among the victims, it was mostly because the Nazis deviously hid their true intentions when they rounded up unarmed men, women and children and shipped them off to death camps. For most Jews, there was no choice whether to fight or not because they never had the chance to take up arms.

But by luck or fate, thousands of Jews–many of them teenagers–slipped out of dehumanizing ghettoes, concentration camps, and hiding places to join resistance groups known as partisans. Fighting primarily in Eastern Europe, these brave men and women wreaked havoc on the Nazis through guerilla warfare and sabotage. These warriors relished the opportunity to fight back. As Sonia Orbuch, a Polish-born partisan, explained, “If I was going to die, I was going to die as a fighter, not as a Jew.” This book chronicles the experiences of Sonia and six other young Jewish partisans. These accounts are based exclusively on the personal, lengthy interviews with each former partisan featured in this book. Using real names, dates and places, these stories are written as factual and truthful versions of their recollections.

Any teacher who has a Scholastic account can order books for you on scholastic.com or by calling 800-SCHOLASTIC and asking for item number 978-0-545-38578-7.

Please note that these Holocaust books can be purchased through school book fairs and Scholastic’s monthly school book club catalogs. However, any teacher who has a Scholastic account can order books for you at scholastic.com or by calling 800-SCHOLASTIC. But there are two books—Survivors and Escape—that can be purchased on Amazon.com