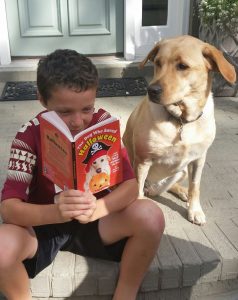 Like humans, every animal possesses a survival instinct that takes over when facing a life-or-death situation. Whether that instinct is triggered by a predator or by thirst, hunger, cold, heat, pain or terror, the animal will try something, anything, to live another day. This book is a celebration of true cases of pets and wild animals that survived what appeared to be hopeless predicaments. You’ll read, for example, about the survival of the dog that was hit by a train, lay between the rails for three days as dozens of trains roared over him, suffered the loss of two legs, and twice faced attempts to shoot him… the cat that was trapped for two months under a concrete floor of a building under construction… the small water buffalo that was being pulled in a tug-of-war between a crocodile and a pride of lions. If there is one common thread among the accounts in this book, it’s the animals’ refusal to give in to death. They simply weren’t ready to die.

Any teacher who has a Scholastic account can order books for you on scholastic.com or by calling 800-SCHOLASTIC and asking for item number 978-0-545-25507-3.