The animal kingdom teems with pets and wild beasts whose outrageous, ridiculous or mortifying actions have brought embarrassment to all creatures big and small.  These wacky troublemakers deserve the ultimate dishonor and notoriety—as members of the Pets Hall of Shame. 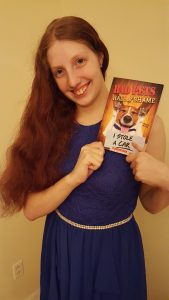 There is no actual museum or building dedicated to animal absurdity.  If there were, it would probably stretch several blocks to accommodate all the awards and memorabilia for the goofs and gaffes, bloopers and blunders that dogs and cats and other pets have committed over the years.  Without such a gallery of disgrace, this book attempts to name and shame a recent sampling of the wackiest, head-scratchingest (yes, that’s a made-up word so don’t use it in your next book report), scatterbrained moments perpetrated by pets.

Among the two-legged, four-legged, finned and winged creatures inducted into the Pets Hall of Shame are: the delinquent doggy duo who went for a joyride alone in a pickup truck and crashed it into a riverbank… the wacky pet kangaroo who stole women’s underwear off of clotheslines… the impish kitten who turned on the water faucet full blast and flooded an entire animal shelter… the hungry bear who broke into a bakery and devoured two dozen fresh pies—and then grabbed two more for take-out… the foolish Chihuahua who climbed a tree, then had no idea how to get down and had to be rescued by the fire department… the pair of pet llamas who sparked a wild chase—carried live on nationwide TV—involving cops, lasso-twirling citizens and pursuers in golf carts… and the crazy canine who swallowed 22 live rounds of ammunition. (No, he didn’t go out with a bang; he was fine after surgery.)  Animals now have a place to claim some fame from their shame.

Any teacher who has a Scholastic account can order books for you on scholastic.com or by calling 800-SCHOLASTIC and asking for item number 978-1-338-18658-1.